In the age of the Great Resignation, salaries have never been more important. They’re a key to holding onto your staff, attracting new team members or a factor in your job search. So, what does the B2B salary landscape look like right now?
With this in mind, we gathered research from talent solutions firm Robert Half, comparative salary website Payscale, UK-based salary calculator Check-a-Salary and employment website Indeed and explored their salaries.

About these different reports

Before we proceed, it's worth noting that the data presented is from each of these organisations' latest research. However, it is not entirely clear as to when exactly this data was collected, or how many marketers were surveyed in the process.

Robert Half divides their research into three broad categories based on seniority:

Payscale, however, takes the highest and lowest salaries. They use this scale to find a base national average. Notably, they have a gender breakdown of the number of men and women in a role.

Like Robert Half, Check-a-Salary outlines a national average from minimum, median and maximum earners within a job from ages 18-over 60.

Indeed gathers a single average salary for each job. They also include regional differences.

All research is based on data from the UK. For more information on the data, just follow the links at the end of the article to the individual research pieces.

So, who’s earning big and where? As per Robert Half’s research, it comes as no surprise that salaries increase with the experience of each candidate. Group three (most junior) CMOs earn an average of £90,000. There is an increase of £30,000 as seniority increases £120,000 for those in the second group (mid level), and £150,000 for third group (most experienced). The total average is £120,000.

VPs of marketing follow in terms of highest salaries. Indeed finds an average of £101,113. For Payscale, this is lower with an average of £97,133. Following the trajectory of CMOs, VP salaries increase with experience:

Although slightly lower, Indeed research highlights a similar trend with a national average of £56,035 and an increase to £62,000 in London.

When it comes to those in digital marketing, London salaries clearly come out on top. Indeed reports an average head of digital marketing salary of £61,914; this spikes to £71,000 and falls to £53,000 in Bristol. Robert Half report a higher average of £83,480. According to Payscale, digital marketing directors earn £71,216.

When it comes to gender, according to Payscale there is a fairly even gender balance - albeit slightly more female heavy:

It would be interesting to see if there’s a noticeable difference between the salaries that men and women receive, but sadly there’s no data available. 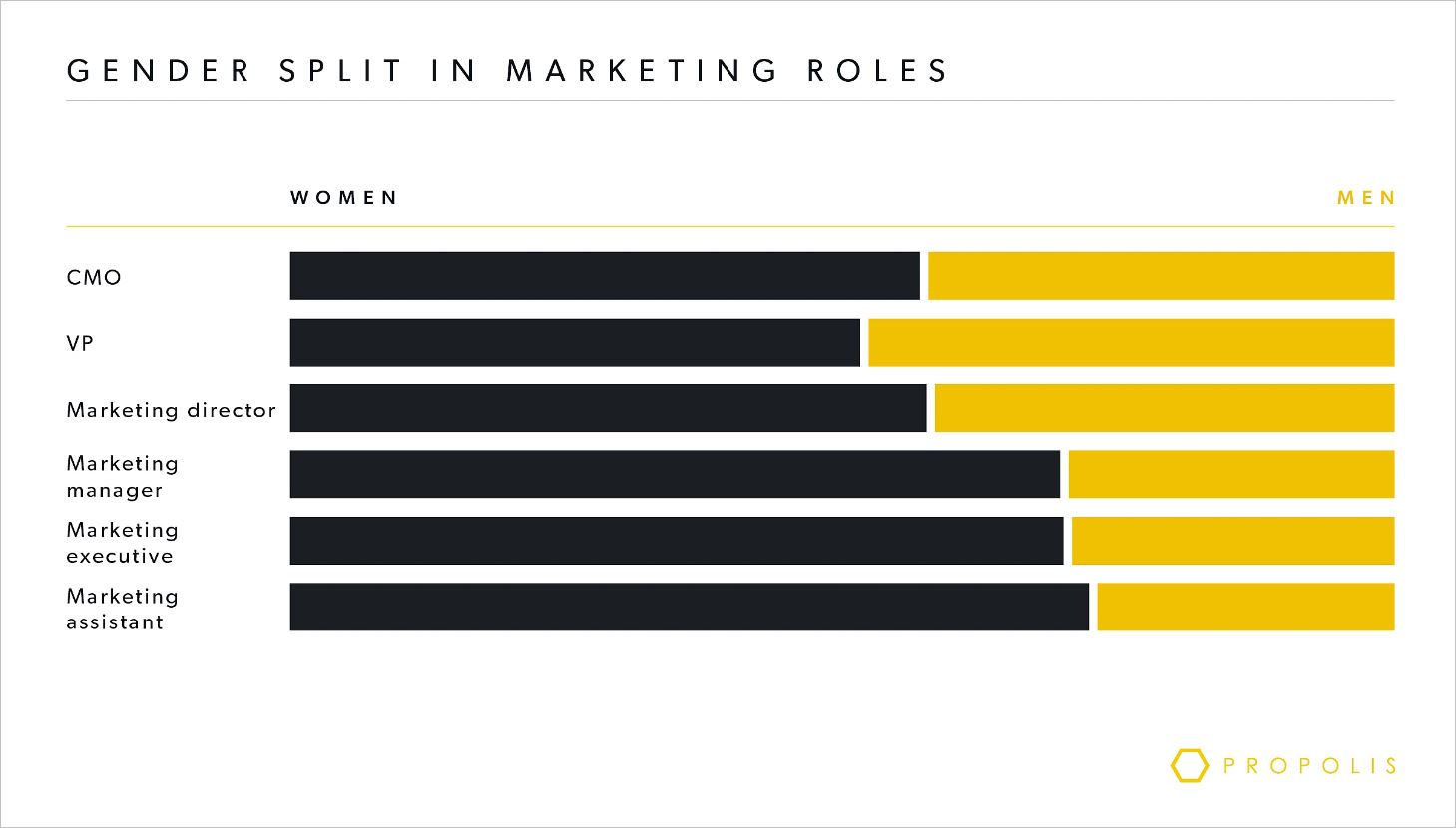 Once more, salaries are higher in the capital when it comes to marketing managers. For Payscale, London earns 15.6% more than the national average which is £34,000. The lowest salaries are in the North, such as Manchester which earns 7.4% less.

It’s important to note that whilst Indeed reports significantly lower figures compared to other research, they advertise jobs with higher figures ranging from £37,314 - £53,301.

Payscale’s research also takes into account the fact that wages are 17% higher in London, perhaps accounting for a wider range of salaries.

Going further down the chain, digital marketing executives have an average salary of £27,000 (Robert Half, Indeed). As per Indeed’s research, unsurprisingly those in London have the highest salary of £33,000; Northern cities sit between £24,000 - £27,000.

Interestingly, London earns on average £3,000 more than cities in both the South, North and Scotland. Marketing assistants follow this trend. Across Robert Half, Payscale, Check-a-Salary and Indeed they earn an average of £21,000. This reaches as low as £19,000 (Robert Half: group three) and as high as £24,000 (Payscale). London wages are not significantly higher: according to Indeed, the biggest difference is in Manchester and Nottingham who earn £5,000 less. 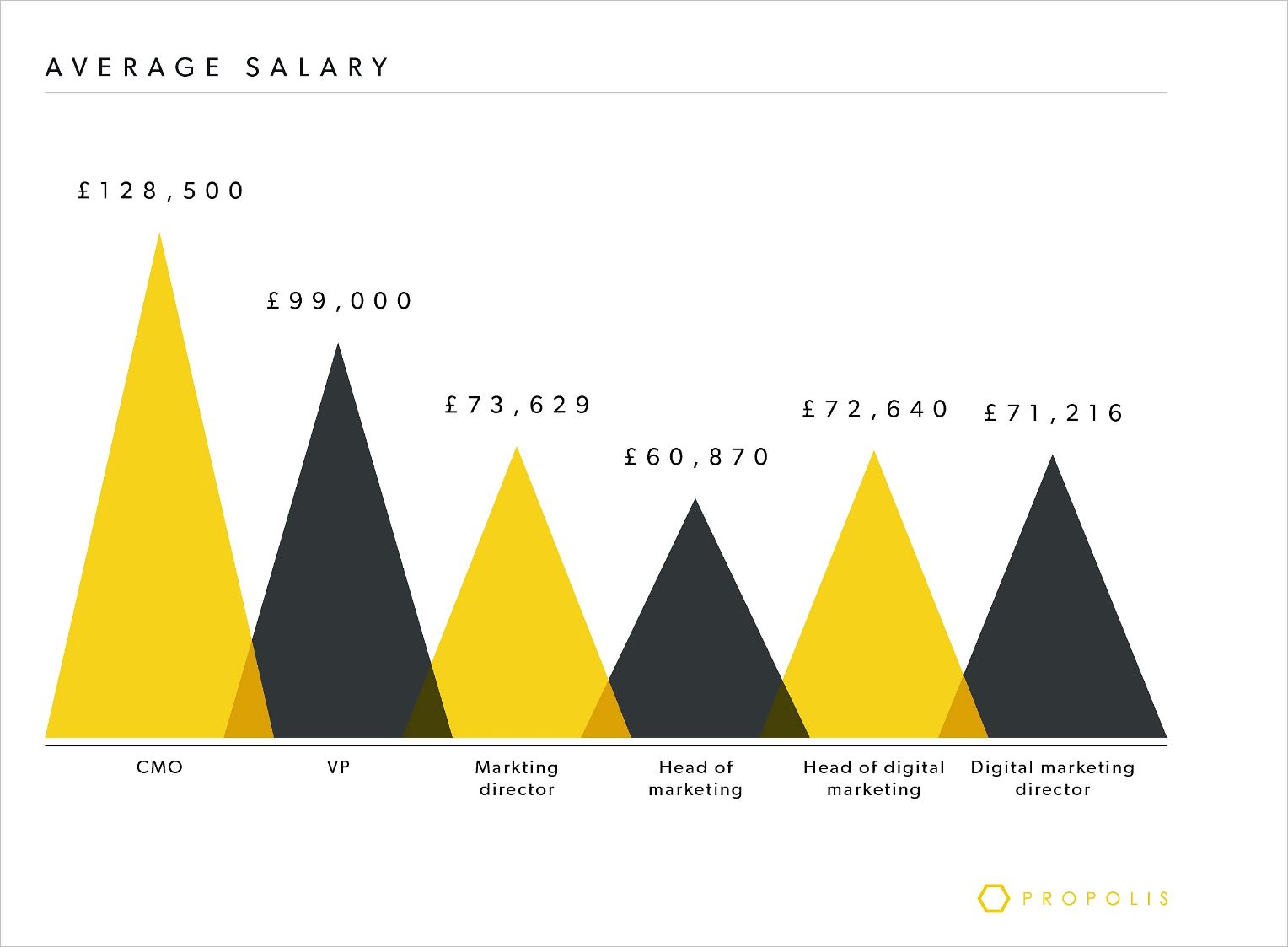 Content and communications is similarly heavily female dominated across the board. PR/Communications managers earn an average across all four sources of £39,9500 with 72.5% female and 27.5% male (Payscale). Social media managers similarly earn £29,630 (Robert Half, Payscale, Indeed), once more reporting 72.7% female and 26.9% male.

Whilst average salaries reported for graphic designers rest between £23,500 (Payscale) and £33,982 (Check-a-Salary) one thing is consistent: London comes out £10,000 higher than her Northern counterparts.

The industries showing a strong demand for marketing and creative roles are:

In summary, it comes as no surprise that salaries are higher in London and increase with a candidate’s experience. CMOs bring home the biggest cheques with an average of £102,8500 across all four pieces of research.

Notably, those in digital marketing earn more than their solely marketing counterparts. As we move more firmly into a digital world, perhaps this wage gap will continue to increase?

Perhaps the most interesting trend is gender. Marketing is largely women-heavy, reporting an average of 70% more women than men in mid-low marketing roles, PR/communications and social media. The exception to this rule is content where figures are reversed to over 60% men. Juxtaposing this, almost half of the top earners (CMO, VP, MD) are men. To find out more about the research, click the links below:

Discover more about how Propolis can help you and your team