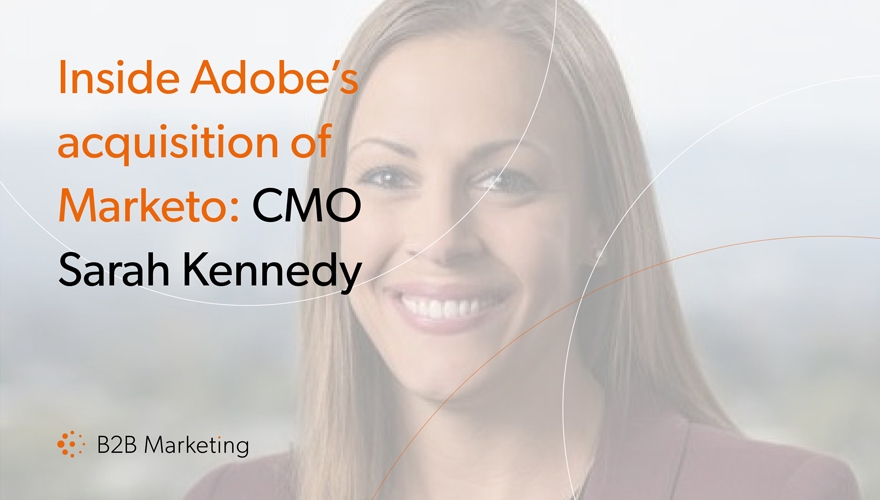 Adobe’s $4.75 billion acquisition of Marketo is big business by any definition. Paul Snell speaks with Marketo CMO Sarah Kennedy about what the acquisition means for the marketing team and customers

When I ask Sarah Kennedy, who joined Marketo as CMO from Sabre in October 2017, if she anticipated to be knee-deep in one of the biggest martech acquisitions a year into the role, she laughs: “No! When you enter a private equity environment there’s always the possibility your ownership structure could change – but I did not expect it to happen this fast.” I quizzed her on her role in the deal, and how she’s managing the merger from a marketing perspective.

What’s the feeling on the ground at the moment, since the acquisition was made public and has now cleared its regulatory hurdles?

Sarah: I’m really excited, because I never imagined when we first met with Adobe it would turn into where we have landed. There was a lot of potential suitors out there for Marketo, and the cool factor of bringing together two companies that are passionate about marketers has been serendipitous and exciting. Adobe is perhaps the only company in the world that has more passion about what the marketer does than Marketo.

Day-to-day we’re working heavily on how we leverage the best of both worlds from both companies at all levels. We’re doing integration planning, on how we bring the platforms together, and the smaller things, such as how do we integrate with Adobe Experience Cloud in the short and longer term.

When did you get involved in the acquisition process?

I was part of that process from day one. Being part of a private equity firm there are always suitors knocking on your door. We’ve been in partnership discussions for quite some time, and sometimes those turn into bigger things – and this is one of those that has.

One of the really cool things about Adobe is they’re so interested in the detail. We’ve had countless meetings sharing about our business, but it showed how much they care. They weren’t just in it for the numbers, it was because they really believed in what we were doing.

Is it difficult to keep the momentum going within the team once the deal has been announced, given the uncertainty it creates?

That is hard, because there are a lot of scenarios where an acquisition can take on a lot of different forms. Adobe was very sincere and committed on day one to be all about the people. They know the people make Marketo a success, but that’s something your team can’t see come to reality until you’re there and they have job offers.

Now what’s exciting is we’re past that state of ‘purgatory’ and now we can create certainty and communicate that – what our integration plan is, how do they play a role, and become part of something bigger.

How have you led your team during the transition process?

I’ve tried to encourage my team to take a minute to sit back and consider everything they’ve accomplished. Everything is moving so fast, but this has given them an opportunity for reflection, appreciation and excitement, and to take that minute to look forward to what’s next.

For many of them this is an exciting move in their career – when you look what the potential for a marketer is with Adobe, it’s not hard to get my team excited about that. They can start thinking about how to market the entire Adobe Experience Cloud, which gives marketers goosebumps. Now they are thinking how do we bring that forward, and not about how it’s not about becoming ‘like Adobe’, but bringing that passion and energy to make Adobe even better – as that’s what Adobe wants and needs for us.

With all that enthusiasm, it is a challenge to keep everyone on track without being distracted?

There’s always a challenge to make sure you don’t over-rotate into an integration. We have certain people focused on the integration, and others are only brought in when needed. We’re trying to draw a pretty clear line around that, because the last thing we want to do is be too focused on over-rotation and disrupt the day-to-day business.

How will the marketing function look once the two businesses have come together?

We’re still working through the details on that, but there’s no CMO I respect more or am as excited to work with as [Adobe CMO] Ann Lewnes.

In the short term we’re focused on making sure we can deliver the same value we always have to our customers and do that through 2019 with no disruption to the business – and make sure we’re all coming together to do integration where we can bring value to our customers. Beyond that it’s where do we have natural points of integration, and where can we collaborate to leverage the best of both worlds.

I’ll be working really closely with Ann and her team, and I still report to [Marketo CEO] Steve Lucas as part of the Adobe Experience Cloud, and so will our marketing team in the immediate future. But we’ll be certainly looking at points of integration where we can work together more closely in the course of the next year.

"For many of them this is an exciting move in their career – when you look what the potential for a marketer is with Adobe, it’s not hard to get my team excited about that"

How has the deal affected the long-term plans you had put in place at Marketo?

One of the things that makes Adobe so successful at acquisition is they think about it as two companies coming together to create an entirely new company – and we’re all part of defining what that future looks like. We’re spending a lot of time thinking what that new world looks like, and one of the things Adobe wants most is the talent and people that are coming over from Marketo. My team are all really excited we’re now part of the Adobe family and excited to hit the ground running. It’s neat for me as a leader to see them have new career opportunities inside Adobe.

And what about your messaging and go-to-market strategy, what’s been the impact on those?

You see how other people view you. At Marketo we’ve been telling a much bigger aspirational story about where we’re headed, and we were going to be building toward. We now have it out of the box, because Adobe has filled in those gaps in our roadmap.

It’s changed how we think about Marketo. The way we’ve served the B2B marketer has been very unique, and combining that with Adobe Campaign, we’re the first platform that can really serve every use case for marketing. That’s changing the way we think about our story, and the role we play.

Having been on the buy-side previously, has anything surprised you about being on the acquired party this time?

It changes the way you think about communication. There are many things that happen in the process that seem like small details, but are very important. I’ve learned a lot this year by leveraging our Bizible team [which Marketo acquired in May], asking what did we do wrong when we were going through this with them, or what did we under-communicate about the acquisition.

We were able to do a lot differently, we were a lot better informed through the process, and I was able to be involved early in the communication planning. Bringing the mindset to communicate effectively with our employees, as well as with our customer base, that was top of mind for me and I’ve become more sensitive to that.

"At Marketo we’ve been telling a much bigger aspirational story about where we’re headed, and we were going to be building toward. We now have it out of the box, because Adobe has filled in those gaps in our roadmap"

What are the big things that need to be completed in the next six months?

Part of it is working out what are the small things that can get done and released into market sooner rather than later. Arun Anantharaman, our chief product officer joined us from Adobe, so he has a unique knowledge base to lead that effort of how we can integrate the two products, and I think that’ll help us get there sooner than we normally would.

Beyond that, there’s a lot of things that have to go into the planning, and I think about how quickly can we share knowledge, to cross-pollinate teams and get to a point of common understanding faster. That’s where we’re at right now, bringing our teams physically together keeping the trail hot between San Mateo, Denver and San Jose, and we’re meeting on a daily basis to share that information.

When you have two very powerful brands, like Adobe and Marketo, where doe the thought process begin on how you smash those together to create a joined up approach?

There is affinity and brand equity in both brands, but what you’ll see is Adobe is very thoughtful when they bring in an acquisition, and they don’t automatically change things. As we come in we’re going to become part of the Adobe Marketing Cloud, as the Marketo Engagement Platform. What they are very thoughtful about is they’re not rushing to assume the same thing, it’s not a cookie cutter application across anything they acquire. They’re doing a lot of research, a lot of brand studies, they’re getting to know our customers personally. For a lot of our customers, their own personal brands have been built on Marketo, and Adobe is very sensitive to, and aware of that.

Engagement is what I really think about us centering on. It’s something new for Adobe, and building around that as the construct for whatever the brand may be – whether it is Marketo or Adobe – as long as it is centered around engagement, and enabling that – as part of what we’re bringing to the portfolio, I think we’ll succeed.

And what does Marketo bring to the deal?

We bring a fire and a passion for the B2B marketer like no other. Adobe know it’s had a gap in serving the needs of the B2B marketer, so I think our relentless commitment to serving the needs of those marketers is unique, and they’re sinking their teeth in to understand that with us. That energy, passion and commitment is the drive that’s made this business successful. Adobe sees that and is hoping to amplify that and to fan that flame as they bring us into their business.

What would your advice be for fellow CMOs or marketing leaders who might be on the receiving end of an acquisition?

Lean into it and embrace it, and help your teams to do that too. There’s endless opportunity on the other side of these deals, and some people resist that. It’s hard to lead a team through change, but it’s even harder to resist change when it’s a positive thing for your customers. When that’s the premise of the deal, and you do lean into that, your team is going to be happier and more successful, and your customers are going to get more value out of it.