Heralded as the holy grail of B2B marketing, programmatic has earned its place in the overall marketing mix in recent months. But what are the main barriers to success? At September’s roundtable, held in association with LinkedIn, we tackled the subject head on

The minute a channel or strategy gathers enough momentum to be held up as ‘the next big thing’, switched-on marketers have every right to feel sceptical. And as programmatic hurtles towards them with unprecedented speed, many are feeling understandably confused about its potential strengths and weaknesses as a marketing tool. What is it, exactly? How does it work? And what rewards could it reap?

If programmatic is eyed with caution by some, it’s also sending the heart rates of others racing – and for good reason. This is a whole new way of targeting niche audiences with carefully tailored content, and opens up a world of new opportunity: it’s an approach that gives marketers the ability to operate in real time and jump on top of trends as and when they hit.

We sought to address some of the main concerns surrounding programmatic and outline a roadmap for success. Here are the key findings.

Programmatic isn’t as complex as it might first appear

Put simply, the approach can be summarised as digital ad buying that involves automation and data-driven decision-making, frequently and in real time. On one side of the arrangement you have the supply-side platforms (SSP), enabling publishers to sell their inventory programmatically and focusing on the success of the seller. On the other side, you have the demand-side platforms (DSP), giving buyers access to programmatically-sold inventory and focusing on the success of the buyer. A traditional IO-based media buy involves the publisher running the campaign for the buyer, whereas programmatic trading puts the control to manage and measure campaigns in the hands of the buyer.

With one attendee revealing that they’ll be spending 60% of their budget on programmatic in the next year, it was agreed that in four to five years all advertising will be bought and placed programmatically.

And this, in essence, is the main reason for its widespread uptake in B2B marketing; it enables you to pinpoint a niche and difficult-to-reach audience with content created specifically for them.

To add credence to this theory, Forrester research predicts just 20% of programmatic spend will be invested in open ad exchanges (versus 65% today) by 2021.

Perhaps it’s the very technical descriptor that puts people off or the fact that when you delve deeper the approach itself can be pretty complex. But as with any marketing channel, success comes with the right creative and the best content. A challenge here comes with the need for consistent design across all platforms: agreeing on a strong creative wrap that can be used across all platforms is key.

The cleverest approach to programmatic involves an understanding of not only your audience but also the landscape in which they operate; hinging your messaging around current news can really help maximise engagement.

Could the intrusive nature of programmatic put buyers off?

When one attendee raised this question, the response from the group was pretty overwhelming: instead of being seen as intrusive and sinister, programmatic should be celebrated as being both timely and targeted, they said.

With so much of programmatic’s success hinging on the creative – as well as the timeliness of the content – client-side marketing teams will be looking to their internal agencies to ramp up the quality and quantity of their output. After all, programmatic campaigns have strict deadlines and parameters within which the creative aspect must sit, and these are often pretty immovable.

Programmatic spend isn’t just another add-on: it can actually replace spend in other areas

One attendee revealed that instead of spending huge sums on a stand at a big trade show, their company will be attending ‘programmatically’. As well as sending a number of company representatives on the ground, they’ll be delivering programmatic content to prospects, depending on which seminars they’ve attended. This allows the brand to jump on interesting conversations and offer ideas and solutions via whitepapers and product trials.

In fact, research from Dun & Bradstreet revealed almost 70% of B2B marketers plan to increase their spending on programmatic advertising in 2017.

In B2B, programmatic is best used to gently nudge prospects towards a second tier of engagement

This second tier or engagement could come in the form of a webinar or product trial – but whatever you choose to offer, remember that in B2B the buying cycle is long and nurturing relationships through timely, well thought through content is key.

Programmatic is great for testing and optimisation

Indeed, these are some of the main advantages that can be used to woo and impress the board. Unlike some areas of potential investment in B2B, programmatic success is easily traceable and ROI can be determined quickly and easily.

Participating at September’s roundtable, held in association with LinkedIn, were:

The discussion was moderated by Jess Pike, editor of B2B Marketing. 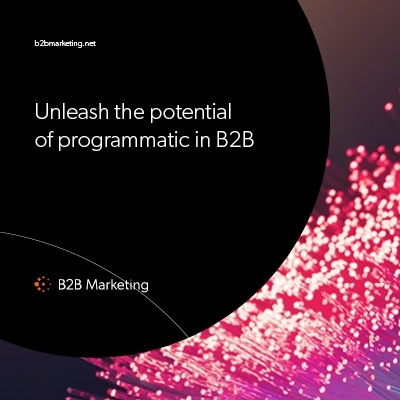