Award case study: Find out how twogether won the Gold for our new category, ‘Best use of martech for brand building’ 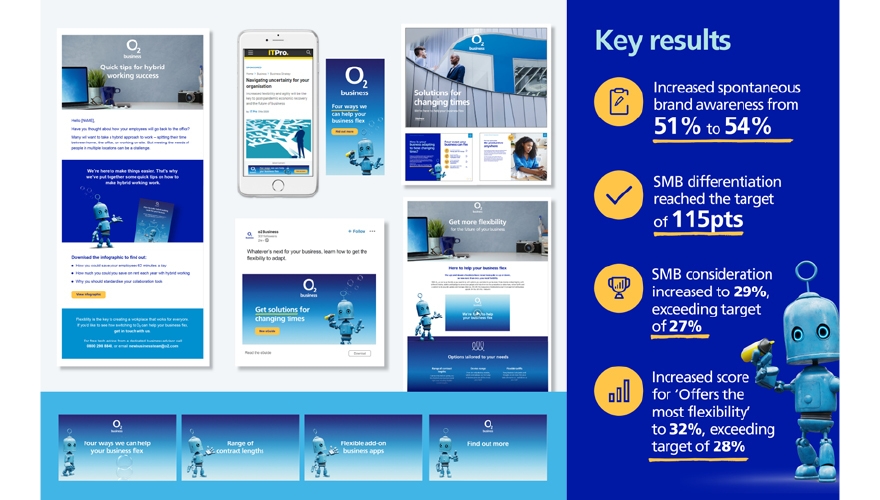 Learn how twogether's campaign for O2 won big for our new category in 'Best use of martech for brand building'.

This campaign used a new approach to martech integration to help O2 build a stronger brand presence in the SMB sector. As a brand, O2 is famous for its mobile proposition.

The challenge was to build awareness of its wider range of services among an elusive and price-sensitive audience. By bringing new channels into O2's existing martech stack, and integrating them to create single-view dashboards, they  were able to reach a wider customer audience and optimise performance in real time.

The result was an increase in spontaneous awareness from 52% to 54%. The campaign also reached its target of 115 points for O2's SMB differentiation score.

Specific issues or challenges to be addressed

Meeting new SMB-acquisition targets (1-499 employee size) had become a challenge forO2. Armed with a revised proposition and new brand narrative of “We’re here to help your business flex”, O2 were geared-up to shift their brand-power back towards its previous status and ambitiously driven acquisition within the SMB market.

The campaign launched in September2020. O2's targets were shaped around driving new acquisitions and consideration in the SMB market by the end of the year:

To do this, the campaign delivered a structured content strategy across multiple channels, focussing on both customer and prospect audiences. This mix included:

This campaign meant a break from the norm for O2. Twogether introduced new marketing communications channels to enhance the reach of the brand awareness activity and achieve the lead generation targets.

O2 hada robust and structured Martech stack in place to deliver their campaigns, but their objectives meant they could not limit themselves to their existing technologies.

New solutions would be required to enable new channels and the integration of that data.

Its media analysis shows that whenlead data takes longer than 48hours to follow up, there is a substantial drop in conversion rates. Capturing data across multiple channels in real time was therefore critical for optimisation.

Implementing these new on-demand solutions avoided a longer-term investment whilst they were trailing the new channels.With these in place, they enabled smarter automation which identified the right message, across multiple streams, to achieve optimal conversion rates.Using bespoke data processing, they evaluated the new channels autonomously to identify the right type of nurture activity needed, ultimately tailoring its automation to enhance the customer experience.

Tracking engagement in this way allowed them to serve targeted content that enhanced existing messaging, trialled new topics with those who were least engaged and applied a custom path for each contact generated.

Ongoing reporting varied in requirements for each stakeholder:

This included A/B testing of content, changes to custom paths based on evolution of campaign strategy,and integration of intent data from third-party sources.

O2 had mainly been using email as their main channel. The analysis of the results this was generating showed that less than 20% of customers and 10% of prospects were engaging.The expansion of channels and creation of custom paths to Eloqua Meant O2 were able to tangibly track the success of their content and context. The success of this approach to the SMB market was then applied to the enterprise sector. From this, they were able to append lead data with information needed for O2’s existing tech stack, transferring leads quickly and automatically activating nurture activity, based on the content of engagement.

Changes tracked in brand performance canmake a significant impact to the brand.This Campaign both hit and/or exceeded O2's Ambitious brand recall targets at every level:

“Business Flex was a real moment in time for our SMB marketing as it brought together all our SMB segments –Small, Medium and Partner markets, into one overarching campaign. That meant we had to work as one interagency and client team to deliver, all done virtually during lockdown conditions! twogether really stepped up to make sure our medium and partner audiences and leveraged the campaign, using the eye catching creative driven from the master brand, to create assets that were appropriate and relevant to our audiences, delivered through an impressive multi-channel approach.The campaign has resonated strongest in our medium business which is testament to the way the campaign layered the message through different channels and with frequency and reach required to land the messages.The campaign has driven fantastic leads and opportunities, leaving us over target at the end of 2020 in all metrics."

This submission won for ‘Best use of martech for brand building’.

Check out the winners here! 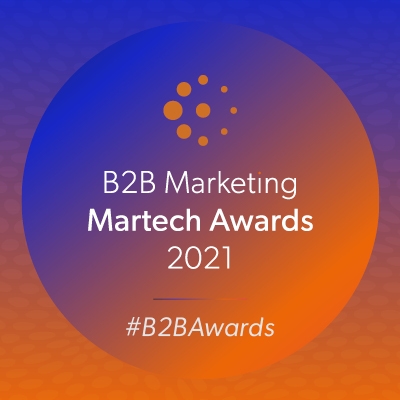