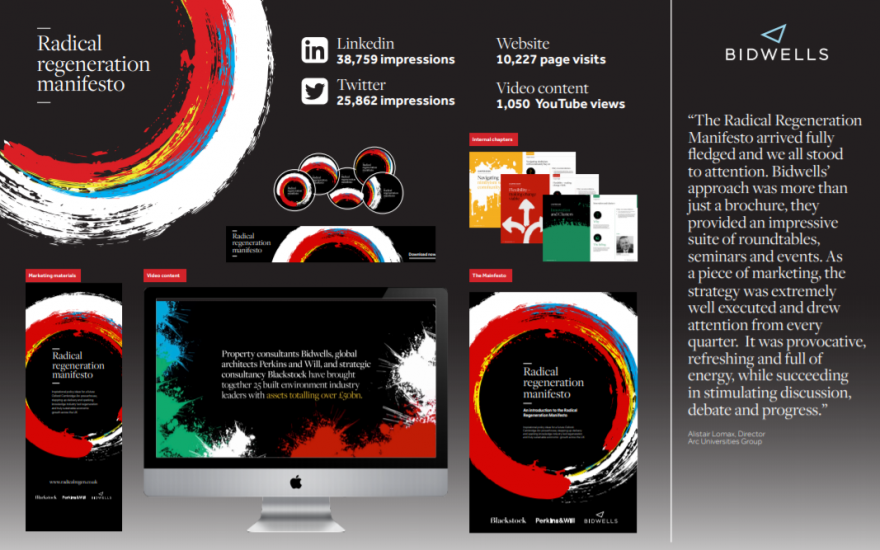 Not many £50 million turnover businesses can say their thought leadership has directly influenced government policy and seen their ideas included in The Budget. Bidwells can.

Not many regional businesses have fought off London-based competition by leading a coalition of the most influential property leaders, responsible for assets worth £50 billion+, to directly challenge government thinking. Bidwells can.

And not many property firms can say their marketing campaigns have helped fast-track major development projects outside the planning system. A unique selling point that will help transform an economic region of the UK.

From a thought leadership campaign delivered for under £30 000, designed to target a hard to reach group of c-suite leaders and politicians...

Bidwells is now accelerating billions of pounds of strategic development across the Oxford-Cambridge Arc.

This case study will explain how it was done.

Bidwells is a £50 million turnover, 180-year-old property consultancy headquartered in Cambridge. Built on serving the Oxbridge Colleges, Bidwells now advises real estate owners, developers and investors on all aspects of their property. The partnership is the leading consultancy in the ‘Oxford-Cambridge Arc’, a region highlighted by government for one million homes and signicant economic growth.

The political upheaval in Spring 2019, was slowing housing and infrastructure delivery across the Arc.

Despite this, the Arc was gaining significant interest from property developers and investors, and major competitors were beginning to target Bidwells' market.

The strategy was clear: set out to position Bidwells’ partners as key facilitators between senior government officials and 30 senior decision-makers at major property firms As a mid-size business, Bidwells had the ideas, but not the clout. Bidwells brought its team’s deep political knowledge, contacts and intelligence together with the biggest names in property to deliver a thought leadership campaign that would:

There were three defined stages of the Radical Regeneration campaign, each requiring different channels and techniques.

Timescales of the project

The Radical Regeneration Manifesto campaign has been a huge success. At the think-tank in March, Bidwells was mandated by government to recommend schemes across the Arc to be fast-tracked outside the planning process. This mandate:

So far, Bidwells has put forward 40 projects to be fast-tracked. This is worth millions to Bidwells' c-suite targets and will drive billions in GDP growth.

The campaign also resulted in:

"In a textbook case of how to bring expertise and thought leadership to bear, the Bidwells’ Radical Regeneration manifesto engages senior players in the property industry to support Government in realising its objectives. This is now acutely important at this moment when we need to 'build, build, build'. Bidwells is making as a unique contribution here. It is most superbly illustrated by the excellent work that Bidwells is doing to help the Government work with senior members of the property industry bring the Oxford-Cambridge Arc to life."

This submission won the gold award for 'Best use of thought leadership' and 'Best limited-budget campaign' at the B2B Marketing Awards this year.