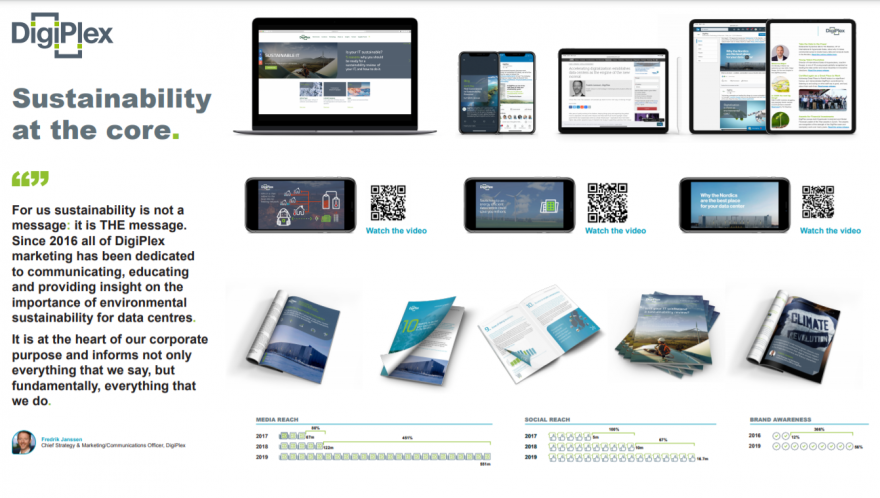 “Every time you browse the internet, stream a television series, use social media or log in to your internet bank, a process starts in a data centre. If that data centre is a power-hungry, coal-red one, you are contributing to climate change – most likely unknowingly.” Fredrik Jansson, CSMO DigiPlex.

Artificial Intelligence, IoT, cloud and social media all have one thing in common; they all physically reside inside a data centre. Today, data centres are responsible for 3% of the world's power consumption and 2% of carbon emissions. By 2025, these figures are predicted to have increased to 20% of global power consumption and 5.5% of carbon emissions.

Data centres are clearly becoming one of the most pressing environmental concerns of our time. However, there has been very little media debate around the issue and hence limited incentive for the data centre industry to talk about and address this problem.

2019 saw Greta Thunberg as Time Magazine’s Person of the Year. Climate change is now recognised as climate crisis, and all businesses must put sustainability at the heart of their operations. Data centres can no longer be IT’s 'dirty little secret' – it’s time to come clean.

DigiPlex designs, builds and operates sustainable data centres in the Nordic region. In operation for almost 20 years, DigiPlex is one of Europe's longest-standing data centre operators and leading in the Nordics. Its five data centres are powered by electricity produced from 100% sustainable sources, and the company has won several awards for its many energy efficient innovations and sustainability initiatives. DigiPlex is a privately owned and independent company, operationally as well as financially.

Despite a 20-year track record, DigiPlex had limited presence in the media and low brand awareness among decision-makers. The low media profile and lack of c-level awareness was starting to affect the sales pipeline.

DigiPlex had to increase its awareness and build its sales pipeline to stay competitive, whilst placing sustainability at the core.

DigiPlex took a brave decision to completely overhaul its brand and messaging to focus on the one issue most others chose to avoid: carbon emissions, energy efficiency and sustainability. The company took a strategic bet that becoming 'the voice of sustainable data centres' would increase demand for its environmentally friendly data centres. But it would not be easy. A 2016 survey of decision-makers showed that sustainability was the least important of 24 criteria when selecting a data centre. And the team was not going to get any budget increase. To meet the stretch target, three strategic initiatives were implemented:

All channels would be utilised:

The transformation project started in mid-2018 as DigiPlex planned its goals and budget for the coming year. It was then implemented, ran throughout 2019, and is still running today.

The stretch targets of doubling the brand awareness, reach and incoming leads on a flat budget have not only been met – they have been exceeded.

Incoming leads: The number of incoming leads grew by 1000%, and new contracts signed in 24 months were up by 470%. DigiPlex is now the clear Nordic leader.

Reach: Media reach and social media reach increased by 451% and 167%, respectively. A 2018 survey shows that 'sustainability' is the fastest growing concern for data centre decision-makers, up from place 24 in 2016 to place 4 in 2018 – a testament to DigiPlex's ability to raise urgent awareness of the issue.

“The exponential results of the marketing transformation have positioned us for rapid growth. DigiPlex has taken the Nordic leadership position in the industry with a huge industry buzz and very healthy pipeline. Our marcomm transformation is a result of true teamwork and it is great to see that it’s having a business impact. Our fantastic brand ambassadors will continue to put 'sustainability at the core' and challenge conventional thinking around data centres through pioneering marketing and communication efforts.”

This submission won the award for 'Best use of content marketing' at the B2B Marketing Awards this year.