Awards case study: Find out how Infinite Global nabbed the award for PR agency of the year 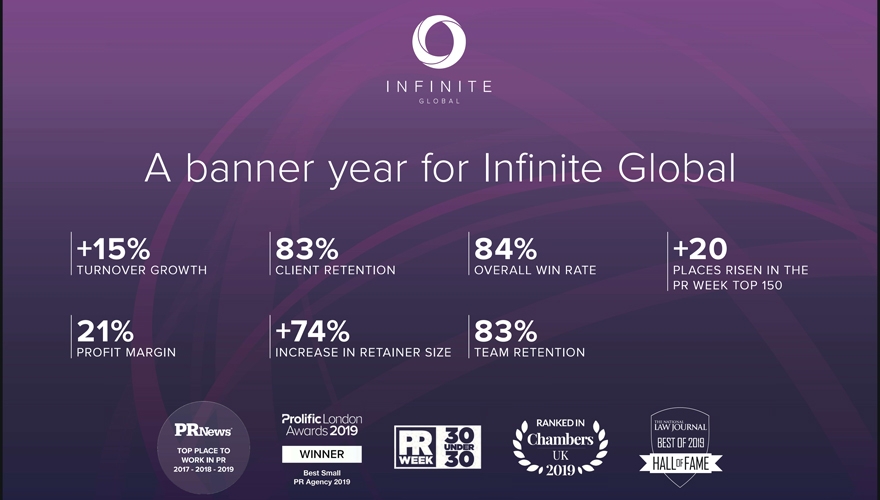 Learn how Infinite Global was able to win the award for PR agency of the year.

Infinite Global is an international communications firm that helps complex businesses demonstrate their expertise to sophisticated audiences. It is one of the largest and most comprehensive communications advisors in its chosen markets, working with scores of legal and professional service firms, large global B2B corporates, leading financial institutions and property advisors, among others. The UK business, based in London, is led by three Board Directors – two fee-earning industry leaders and a Global COO. Its global board includes several high-profile non executives, including the former Head of PR for Clifford Chance and Arthur Andersen. More widely, Infinite Global has a team of 25 in the UK, including a four-strong Creative Services team. Founded in 1994, it has merged with a US-based legal PR specialist to become Infinite Global in 2014, and completed a Management Buyout in 2016. Infinite Global consistently hears from clients that what sets Infinite Global apart is the breadth and depth of knowledge and understanding of their complex businesses and markets, as well as the exceptional quality and collaborative nature of the team, from top to bottom.

A small, representative sample of the high-profile matters on which Infinite Globaladvised include:

Among the many examples of its creative thinking include:

• Designing and delivering a first of its kind initiative for an international professional services firm focused on ‘smart decision making’ for business leaders. The campaign examined the traits of quality decision-making in the context of corporate success, exploring four strategic indicators. Data indices and report materials were produced as both a substantive standalone document, and in a digital modular format that allowed member firms to create their own local marketing collateral and social media content. This was supplemented by a robust programme of Paid, Earned, Owned and Shared media activity.

• Bringing to life a campaign for a global IP technology company to ‘own’ the idea of digital transformation in the IP sector. At its heart, the campaign featured a deliberately provocative white paper, amplified by multimedia content, social engagement, paid social content and strategic PR activity.

Infinite Global set a number of ambitious goals and priorities for the business, including to:

Infinite Global is proud of its vibrant and loyal team, 83% of which was retained last year and which includes at least four senior individuals who began their careers as Trainees here (one now a Board Director). It also:

Infinite Global provided pro bono support to a consortium of legal advisors acting on behalf of victims of the Grenfell disaster, as well as the Global Heritage Fund. The team has also raised funds for a number of important causes, including the London Legal Walk.

“Infinite Global has become a vital piece of our communications and brand awareness repertoire. As a team, they have never failed to be professional and have a can-do attitude…they have become part of our marketing ‘family,’ and we would be lost without them.”

This submission won the award for 'PR agency of the year' at the B2B Marketing Awards this year.