Awards case study: Find out HP Apollo won out for best account-based marketing for its campaign 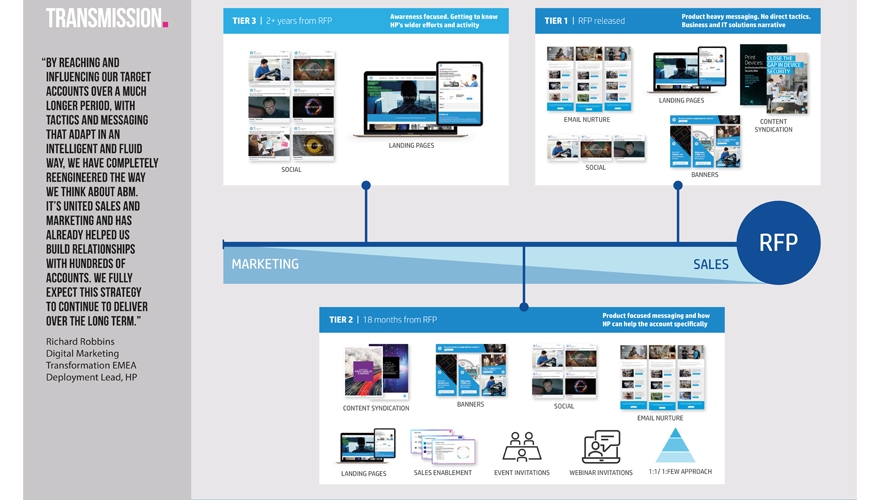 Learn how HP Apollo and Transmission managed to win out for its account-based marketing campaign through sales and marketing alignment, creative messaging and key account management.

HP had a very siloed approach to sales and marketing across its various product lines. Large, multi-national organisations were treated as distinct customers of HP’s PC, Office Print, Large Format Print and 3D Print solutions, rather than “customers of HP’s broad portfolio”.

Transmission needed a more joined-up approach that would align sales and marketing teams around a common goal of generating more business from 4,000 target accounts.

However, to do so, it needed to make some significant leaps in terms of:

HP wanted Transmission to create as much influence within target accounts as possible during the full lifecycle of the decision-making process. And for many deals that meant looking at things over a period of years, not months.

Transmission needed an ABM campaign that would influence organisations sometimes years before they were working on RFPs. But Transmission also needed a strategy that adapted as the RFP date grew closer. This moved the traditional understanding of ’campaign objectives‘ into new territory. And so, Transmission developed a benchmarking model that looked at ‘three Cs’:

The programme focused on C-Suite, Finance, Procurement, Facilities and IT personas at HP’s acquisition accounts – enterprises (1,000+ sta) in EMEA.

To help HP reengineer its approach to marketing, Transmission developed a completely new ABM methodology that employed different targeting, messaging, and tactics depending on each target account’s position in the buying cycle over a period of five years. Insights and data was any given target account five years out from an RFP. Was it two years away? Was it actively looking at suppliers? Its insights allowed Transmission to position 4,000 accounts in different buckets depending on their immediate pain points and priorities.

Transmission then held a workshop with HP’s sales team and customer-facing functions to scour the data and use their own personal knowledge of target accounts. Each was then scored depending on their value, using inputs from the sales team and the intelligence it could gather from predictive analytics platforms. Furthermore, Transmission set up a targeting approach based on job roles.

As the programme matured and insights grew, accounts moved up or down the tiering groups until Transmission had a confirmed renewal date. Consequently, the messaging and activation tactics it used to engage them also evolved

Its creative, messaging, and content strategy needed to be impactful, but also uid to reflect the position accounts were in the buyer journey.

To do this, Transmission needed to:

This became the backbone of Moments That Matter, a creative and messaging proposition designed to help key decision makers reinvent the future direction of their business.

Apollo is an ongoing campaign, and the insights from the campaign insights will become richer over a period of 3+ years. However, the results for the first quarter of activity were regarded as a huge success.

Context (Ongoing analysis on topic’s accounts are consuming): 75% of engaged accounts were engaging with/consuming content that is within HP’s key pillars.

“By reaching and influencing our target accounts over a much longer period, with tactics and messaging that adapt in an intelligent and fluid way, we have completely reengineered the way we think about ABM. It’s united sales and marketing and has already helped us build relationships with hundreds of accounts. We fully expect this strategy to continue to deliver over the long term.”

This submission won the award for 'Best account-based marketing' at the B2B Marketing Awards this year.