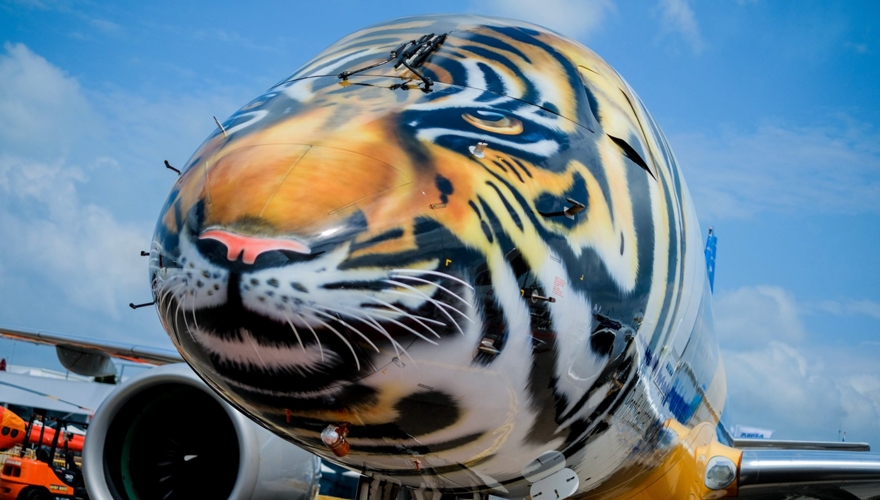 We know that the power of creativity can help brands punch above their weight. You can see it in the launch of the E2 ‘Profit Hunter’ in Asia, where the brand was virtually unknown.

For the Singapore Airshow launch, Gravity used the Asian tiger painted on the plane’s nose. The tiger has cultural significance in the region, known for its hunting prowess – a characteristic that perfectly matches the E2 and its power to make routes more profitable.

Embraer also wanted to promote the award-winning cabin. So Gravity created a viral film starring a tabby cat discovering the new cabin features – surely the most sophisticated cat video yet.

The agency also produced a VR experience which allowed visitors to ‘fly’ the plane, live social casts from the airshow and extensive coverage on social media. There were even OOH ‘roaring Tiger’ digital displays at Changi Airport.

We achieved amazing results in generating awareness and product interest. The tiger painting got more than 500,000 Likes on Facebook, increasing fan following for Embraer. Live TV achieved more than 550,000 views in the first week and the cat film gained 2.5 million impressions. Share of audience went up by 283% and share of voice increased by 127%.

Embraer are the world leader in design and manufacturing of aircraft in 70-130 seat segment (typically known as regional jets), competing against players such Boeing, Airbus and other challengers including Bombardier, Sukhoi and Mitsubishi.

As the market continues to evolve, with Airbus and Boeing becoming increasingly aggressive when it comes to market share, Embraer is confident it can retain leadership with the introduction of their next generation airliner, the E2 ‘Profit Hunter’ which has now entered commercial service.

Creativity and impact, exemplified by painting an Asian tiger of the nose cone of the plane, were central to a campaign that also utilised viral video, VR, animated OOH, Social Casts and, of course, social media.

The stakes are high. Embraer predict that world demand for 70-130 seat commercial airplanes will reach 6,400 new jets in the next 20 years, with a value of $300 billion. As the leading airplane manufacturer in the segment, Embraer want to make the most of this opportunity and dominate sales.

Embraer believe the aircraft that will help them to achieve this is the E2 ‘Profit Hunter’ (a term created by Gravity). A next-generation airliner, the E2 is the most efficient airliner in the single-aisle segment, helping operators achieve sustainable profitability in the most challenging environments.

Earlier this year, the E2 achieved two milestones, industry certification and entering commercial service with Wideroe Airlines. As a result, interest in the new aeroplane has been at an all-time high and sales are gathering pace. Embraer want to build on this and open up new conversations with airlines.

A key element of this was the use of personas, which had a dual role. They reflected the mindset and attitude of the audience and showcased the core benefits of the airplane. The ‘Profit Hunter’ was the lead persona, along with personas for customers and passengers such as ‘comfort seekers’ and ‘middle seat refusers’.

The unique two-plus-two seating configuration (no middle seat) and extra luggage space in the in the E2 cabin are real selling points for Embraer and the reason ‘middle-seat refusers’ and ‘comfort seekers’ love the airplane so much.

The personas are disruptive, flattering to the target audience and create intrigue to capture attention and drive a desire to find out more.

Gravity painted the E2’s nose cone in an eye-catching ‘Profit Hunter’ livery. Inspired by the natural world, it chose the Asian tiger. The tiger livery certainly made the headlines, and was featured by world leading news channels such as BBC, CNN, CNBC as well as the press dailies at Singapore airshow. The airplane livery got half a million likes on Facebook.

A true profit hunter for Embraer.

The c-suite, operators of 70 airlines across 50 countries in existing and new markets including leasing companies, analysts and the media. 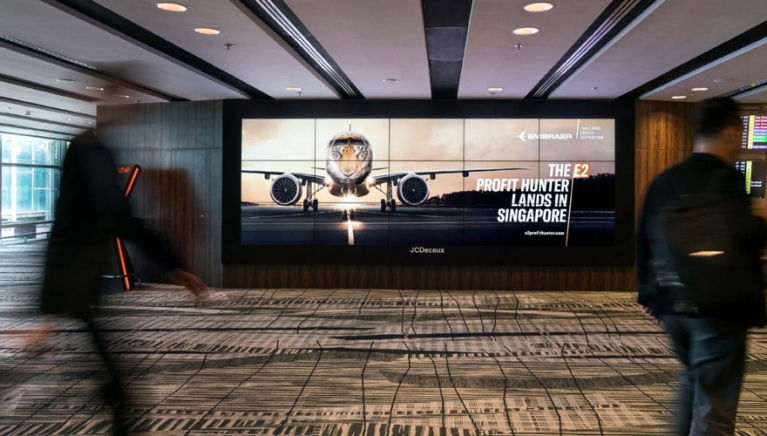 The tightly targeted digital tools were augmented by more broad scale activity in traditional media such as print advertising in trade publication and show dailies and posters at, and in the vicinity of the key airshows. While the content and social media initiatives enabled Gravity to develop the theme further to deliver maximum impact from this truly integrated campaign.

Phase one – Launch of campaign at Farnborough: June 2016

Multichannel support for Singapore airshow from January 2018 continues in the region until mid-2018.

Follow-up and reporting analysis is ongoing. 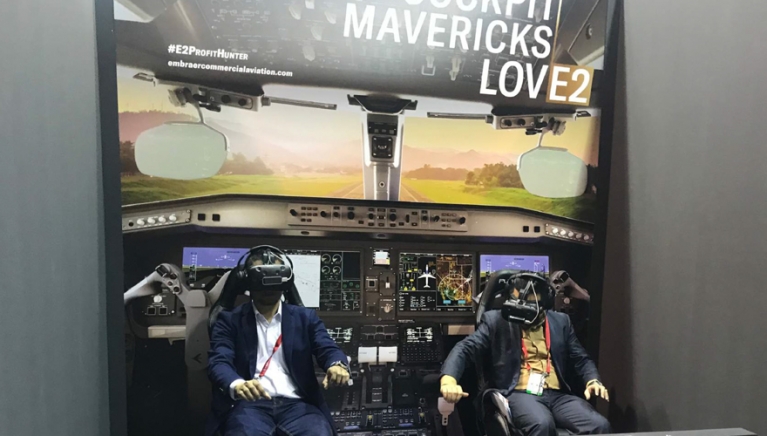 Embraer are now clearly in third place compared to Bombardier – x2 mentions, x3 audience. Almost the same level of audience reach as Airbus, which is tremendous.

The Tiger generated over 450,000 likes and overall Embraer registered nearly 850,000 engagements. The highest engagement of all the competitors i.e. more than Boeing and Airbus.

“At the Singapore Airshow 2018, the E2 ‘Profit Hunter’ was the star of the show – making headlines in the press and on social media. The campaign created by Gravity showed the E2 as a tiger on the outside and a domestic cat on the inside, underlining the powerful efficiencies and award-winning comfort of this next generation airplane. They also used our media budget in a very smart way, generating maximum exposure.

Our partnership with Gravity continues to grow from strength to strength. They really understand Embraer Commercial Aviation’s unique personality and are continually looking to push the boundaries of creativity. The results have been amazing. Well done to the Gravity team”

This submission won the award for Best use of creative at the B2B Marketing Awards 2018.'E2 profit hunter "Tiger"' for Embraer by Gravity Global.