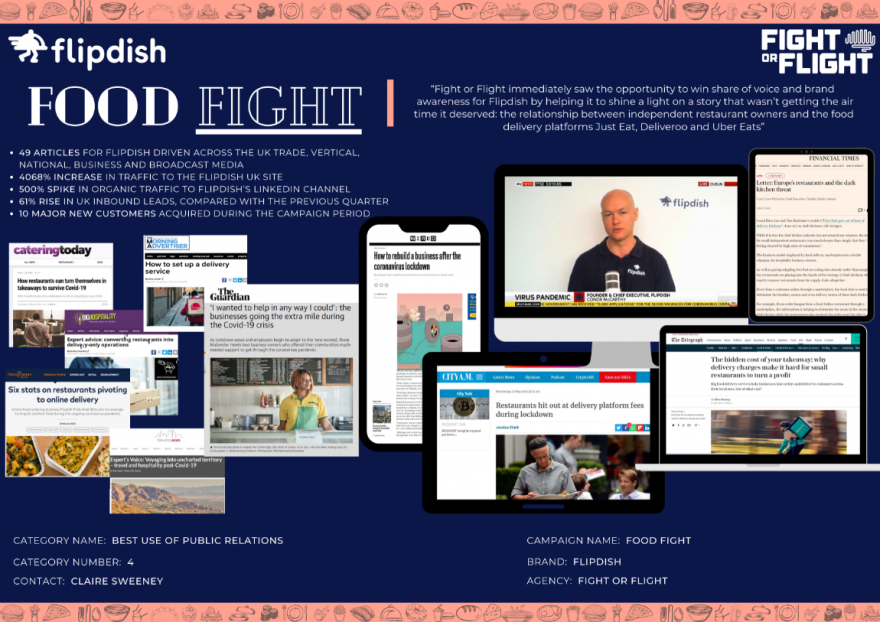 In this campaign, new B2B PR agency Fight or Flight boosted share of voice, brand awareness and generated inbound leads for online ordering company Flipdish by shining a light on a story that wasn’t getting the air time it deserved: the relationship between independent restaurant owners and the food delivery platforms Just Eat, Deliveroo and Uber Eats.

Online food ordering company Flipdish was set up by Irish brothers, Conor and James McCarthy, in Dublin in 2015. Flipdish’s technology enables restaurants, pubs and hotels to quickly and easily add online ordering to their website or mobile app.

Flipdish is well known in its native Ireland and also has a small market presence in the US, Spain and the UK. In early 2020, Flipdish CEO Conor McCarthy and head of brand and marketing Claire Sweeney decided it was time to launch a major expansion in the UK.

To achieve this, Flipdish chose PR over above-the-line marketing – even without the boost of a hard news announcement. As it turned out, the launch coincided with the start of the coronavirus pandemic.

B2B comms agency Fight or Flight immediately saw the opportunity to win share of voice, brand awareness and generate inbound leads for Flipdish by helping it to shine a light on a story that wasn’t getting the air time it deserved: the relationship between independent restaurant owners and the food delivery platforms Just Eat, Deliveroo and Uber Eats.

Like other Big Tech platform businesses - Amazon, Uber and Facebook – the food delivery platforms profit via disruption. They are an existential threat to the local restaurant trade, just as Amazon is a threat to the high street.

Despite providing restaurants with access to a bigger market of potential consumers, there are a number of reasons why an independent restaurant might view a relationship with a delivery platform as a ‘Faustian Pact’:

Under these constraints, many local restaurants who choose to list on the aggregator platforms find it difficult to make sustainable profits.

The problem was exacerbated by lockdown, which forced thousands of restaurant owners unable to make money from dine-in customers to investigate take-away options for the first time.

How could Flipdish persuade independent restaurants to choose its technology instead?

Fight or Flight recognised that Flipdish could become an important voice for restaurant owners everywhere, highlighting the commercial constraints of the platform model and demonstrating a better way to serve customers: 'build it yourself.'

Fight or Flight started with a workshop in Dublin with Flipdish’s leadership to stress-test the campaign positioning. The agency then built a toolkit of messaging, Q&A, data and proof points to articulate the challenge faced by independent restaurants.

Fight or Flight then conducted a social listening exercise to identify restaurant owners who had been personally affected by the platforms’ high commission fees. One example was royal chef Damian Wawrzyniak, who was so passionate about the topic that he agreed to conduct several interviews free of charge.

To demonstrate the scale of the problem, Fight or Flight engaged third-party analyst and respected retail commentator Peter Backman to calculate the value of the UK hospitality sector to the platforms in terms of commission – £1.2 billion – thereby highlighting the huge revenues being directed away from independent restaurants.

Fight or Flight lined up a series of passionate Flipdish customers – Debbie Reilly, general manager at McMonagles in Glasgow, and Tanisha Broady, owner of the Rock of Virtue café in Cambridge – to talk about their positive experiences setting up their own online ordering systems, and provide advice and encouragement for other restaurant owners looking to do the same.

£17,000 including all agency labour costs and third-party costs.

In just three months, from a base of no prior UK coverage, Fight or Flight drove a total of 49 articles for Flipdish across the UK trade, vertical, national, business and broadcast media. Coverage highlights included:

The campaign delivered a signicant commercial impact: a 4068% increase in traffic to the Flipdish UK site immediately following the Sky News interview; and a 500% spike in organic traffic to Flipdish’s LinkedIn channel.

"This campaign shines a light on a story that wasn’t getting the air time it deserved: the relationship between independent restaurant owners and the food delivery platforms Just Eat, Deliveroo and Uber Eats. It has helped restaurant owners to realise the scale of the problem, and that there are much better alternaties out there for online ordering."

This submission won the award for 'Best public relations campaign' at the B2B Marketing Awards this year.