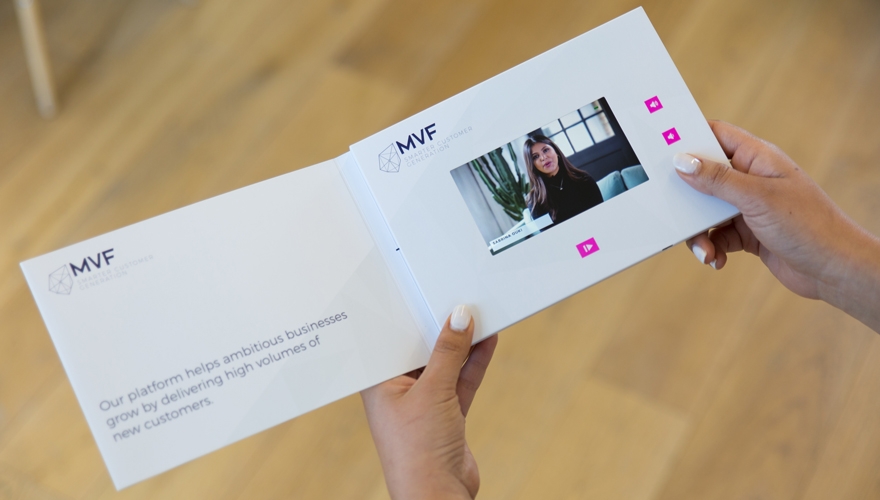 It can be disappointing how unengaging some forms of DMs can be. MVF looked beyond traditional mail to achieve ROI success

MVF seeks to transform how businesses find new customers by delivering clients ready-to-buy customers on a pay-per-lead basis. The brand found that once they got the chance to tell companies about its proposition and low risk model there was a high chance of closing the sale. Following this the trade marketing team was tasked with getting this information to key decision-makers.

MVF offers customer generation services for businesses across the globe, working in a wide variety of verticals, from financial technology and waste disposal to audiologists and insurance providers.

One of our business objectives is securing new clients in key high value sectors. The largest prospect organisations in these key sectors represent the biggest opportunities for MVF’s growth and, as such, the trade marketing team is primarily charged with targeting these organisations.

See all winners from the International B2B Marketing Awards 2018

MVF focused on creating detailed lists of the key decision-makers at each of its target organisations. Those listed were usually senior figures in the sales and marketing departments. As the brand had invested time in undertaking granular research — focusing on company websites, LinkedIn and industry news — it was confident that its prospect lists were reliable.

MVF’s video team created several hundred video messages, each tailored to reflect the individual receiving the video, the company they worked at, and the sector the company operated within. The videos were hosted by real members of the MVF sales team, and explained in simple terms who MVF is and how it can help the recipient grow their business.

The videos were uploaded to mini-tablets and sent out in the mail to target prospects, with a letter explaining why MVF were targeting them. The letters were signed off by a named person in the sales team and all subsequent correspondence was pushed out via their email address to create a one-to-one feel throughout the campaign.

Receipt of the DMs was monitored via a courier, with an automated email follow-up stream triggered once the boxes had been with the targets for two working days. This email campaign featured a series of seven messages, sent at a cadence of one per week.

The emails included links to the videos mailed in the post, personalised content pieces designed to explain the benefits of the recipient company working with MVF, best practice advice regarding sales follow-up, customer testimonials, and a consistent call-to-action based around scheduling a meeting or phone call to discuss the offer in more detail.

Campaign responses were channeled directly into the inboxes of the account owner. This allowed for speedy follow-up from MVF, and ensured prospects continued to benefit from the personalised and targeted tone present throughout the campaign.

After the campaign had been running for a few months, MVF realised the critical nature of this part of the funnel. The brand integrated its sales managers’ email accounts into a central system so it could build a five-week email campaign with content scheduled to be sent from their actual accounts.

The vast majority of the clients brought in via the video box campaign are still MVF clients, and they continue to bill each month, meaning the full value of the campaign has yet to be realised.

The campaign delivered a £23.50 ROI for every £1 spent, and now forms the primary way in which MVF introduces itself to prospect organisations.

“The Video Box campaign has been an unbelievable success. The 2196% ROI speaks for itself. It has been by far the most successful trade marketing activity we’ve ever undertaken. The campaign has consistently exceeded the ambitious quarterly targets we set, and has now been rolled out across all our core verticals.

In addition to the incredible commercial performance of the campaign, I was particularly pleased to see the way it brought together our internal sales and marketing teams. Intelligent initiatives such as this - that emphasise everything an effective marketing strategy can bring to a company's growth - are essential if we are to deliver on our goals in the coming years.

The Video Box campaign is now firmly established as the way in which we introduce MVF to new key prospects, and we firmly expect the second year return delivered by the campaign to dwarf the incredible results we saw last year.”

This submission won the award for 'Most commercially successful campaign' at the International B2B Marketing Awards 2018 . 'MVF Video Box Campaign' by MVF.