Awards case study: Ogilvy's work with Rolls-Royce on the IntelligentEngine wins gold for 'Best use of creative' 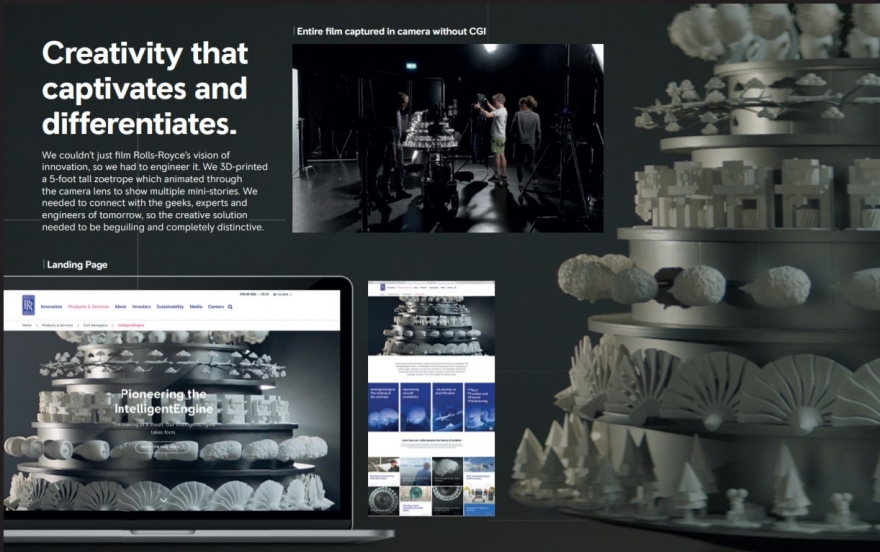 Despite Covid-19’s current impact on the aviation industry, the world is on the cusp of entering a new age of flight.

A near-impossible challenge to meet growing demand for air travel while reducing climate impact is driving Rolls-Royce to innovate on a number of fronts – a programme it calls the IntelligentEngine vision.

But ‘the IntelligentEngine’ is intangible, and audiences struggled to understand and engage with the concept. And of course, every competitor has their own innovation programme, so being heard wasn’t easy.

To reintroduce the IntelligentEngine in January 2020, Ogilvy couldn’t just film a vision; it had to engineer it first. With Rolls-Royce experts to help, Ogilvy 3D-printed a 5-foot tall zoetrope, which animated to explain IntelligentEngine innovations in multiple mini-stories.

A master film was adapted into a variety of advertising multimedia and its elements used in deeper explainer content, including a behind-the-scenes film.

Creativity that captivates and differentiates

The IntelligentEngine needed to connect with audiences beyond Rolls-Royce’s usual audience, and engage the enthusiasts, experts and engineers of tomorrow. And to do that, it needed to be beguiling and completely distinctive.

The campaign set new records for audience engagement for Rolls-Royce – testimony to the power of creativity to capture the imagination of even the toughest crowd.

At 114 years old, Rolls-Royce is a British engineering icon.

From piston-powered Spitfires through to modern turbines on long-haul jumbos, Rolls-Royce has always been an engine pioneer.

Future engine technology will need to meet growing demand for flights while reducing climate impact. It’s a new era that will require total reinvention of aircraft power across design, build and use.

To meet the challenge, Rolls-Royce is marshalling all its resources to innovate on a number of fronts. Rolls-Royce coined ‘the IntelligentEngine’ as a label in 2018 to capture the vision for such an immense programme.

The IntelligentEngine would be the banner used to build Rolls-Royce’s credibility as an innovator and leader.

‘The IntelligentEngine’ needed to be an asset that would help people understand what Rolls-Royce was doing and why, but instead it was causing confusion:

Stuck in theory, not reality

Because it was intangible, stakeholders were unwilling to participate – and believe. Low engagement with IntelligentEngine content online indicated the root problem.

A mostly technical and engineering-minded audience were struggling to understand exactly what ‘the IntelligentEngine’ was – was it a type of AI-enabled turbine? Why should they be interested?

Things weren’t helped by ‘the IntelligentEngine’ covering a big variety of topics – encompassing technology across many separate disciplines, from electrical engineering to metallurgy to service design.

One of the crowd

All of Rolls-Royce’s competitors were also promoting content around engine innovation – and all the creative executions looked the same (glowing blue = ‘digital’). A creative solution could only be effective if it was distinctive.

Resolve the creative expression of the IntelligentEngine on three fronts:

Use creative impact to achieve the IntelligentEngine’s communications goals:

The creative solution would be measured by:

The campaign had to take the Rolls-Royce innovation story to new audiences, beyond just aviation.

The new tech skills needed for the long-term IntelligentEngine vision means Rolls-Royce must attract the best talent from other technology companies, as well as people who are still at university.

They’re smart, curious people who love innovation and already see a lot of material from tech brands. So how could we stop them in their tracks and stand out to them? A traditional corporate video would just be ignored.

Rolls-Royce is pushing science to its limit. It's taking technology and turning it into an art form. Ogilvy wanted to echo that.

Ogily was seeking a technology-driven execution for a core asset that could act as a creative platform.

For inspiration, Ogilvy workshopped with Rolls-Royce’s innovation teams. and discovered an amazing facility where Rolls-Royce was experimenting with 3D printing engine parts.

By designing a series of each model in stop-motion ‘frames’ and arranging them on a cylinder shaped like an engine turbine, Ogilvy created its own 3D zoetrope. When rotated at speed and filmed with a special camera, this zoetrope revealed the models’ animations in a seamless, never-ending cycle of relentless creativity and ingenuity. A perfect analogy for the drive and curiosity of the innovators at Rolls-Royce.

The central creative was a 2.5-minute film of the zoetrope operating, lit beautifully and filmed at different angles to show off its mini-stories as a narrator guided us through the vision.

Ogilvy created a behind-the-scenes film showing how the zoetrope was designed and built. In it, specialists from across Rolls-Royce were asked to explain the stories behind ‘their’ model.

Activating across digital and live channels

Digital ads were created so that each format used a 3D model animation crop best suited to its dimensions – the audience was teased by different elements of the zoetrope in different ads.

As well as screening on Rolls-Royce’s offices’ reception TVs globally, Ogilvy implemented a homepage takeover on Rolls-Royce.com using a full-browser size auto-play video format for the first time on the website. Every web page’s UX directed visitors to go deeper into each area of innovation and keep exploring.

The zoetrope model is in the process of being adapted into an interactive in-person experience to use with special lighting to view live at trade show events.

Attracting diverse audiences from inside and outside the aviation industry.

Maximising the depth of each web visit on Rolls-Royce.com:

“This was a tough challenge to crack. However, the unprecedented combination of technology and creativity in this campaign has not only won support from stakeholders, but has given us a visual language to express what innovation means at Rolls-Royce. It shows how we’re in a different league to our competitors.”

This submission won the award for 'Best use of creative' at the B2B Marketing Awards this year.