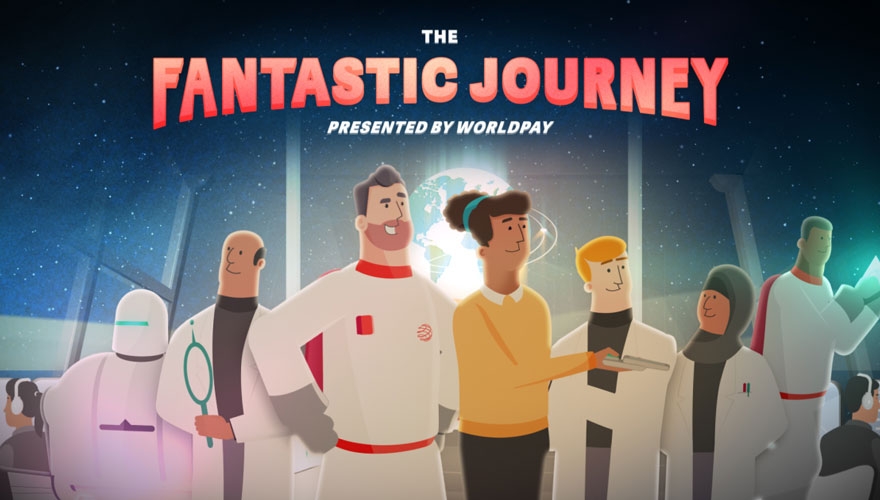 As you ping through that £20 in expenses you owe Mark in sales, it’s unlikely you thought about (or understood) the digital process that happened and the business that makes it possible. It’s the realisation that we’re not all payment provider gurus that prompted Worldpay’s ‘The Fantastic Journey’ campaign – an initiative designed to cut through the digital patois.

At its Rethink conference in Europe, in a roomful of 200 Worldpay customers, those not familiar with the ins and outs of payment processing were scratching their heads. With a sea of people trying to wrap their head around the technology (if not the intricately specific tech jargon) Worldpay was pushed to abandon its formal explanation.

“B2B marketing can be very obscure and quite complex to explain in simple ways,” says Javier Nieto, VP of global marketing at Worldpay. “We’ve all been a little bit complacent or accustomed to being complex. We find it really hard to come out of that complexity bubble because it’s been inbuilt in our day-to-day talk. We wanted to cut short all of that and find a way to explain what we do and we thought animation, as a technique, is really something that lends itself to exactly that.”

The payment provider was angling to demonstrate to merchants that it does a lot more than allowing you to buy your lunchtime sandwich with your Visa or Mastercard. “They may know us for one thing, but we have another four or five that we wanted to communicate and that’s why we decided to focus on the payment journey. Because to convey it with words is really hard to explain,” he adds.

Before the campaign’s launch in April 2017, Worldpay took steps to adopt a new approach to language; launching a short film called ‘Trusted partner’ – a video that kick-started humanising the communication of payment providers.

Worldpay carried out qualitative research (interviewing some of the 200 customers at the Rethink conference) to identify its clients' understanding of what the company does. They found that while customers were predominantly clued up on payments, they knew little about acquiring, risk products, regulations and operating cross-continent – all services Worldpay considers it provides “in the shadows”. The feedback gave Worldpay confidence that creating a payments process video was the right direction due to its customers lack of understanding surrounding the payment journey and a good response to a story-style explanation.

“It was getting really hard to explain, but then we started to present it like a story, and the minute we started explaining it like a story we knew we needed to put that story into a video,” says Javier. "Then we realised if we really want to make it a story about a journey then it becomes hard and very expensive to do with any other method. We started thinking about people travelling around the world and videoing stuff and it still didn’t really cut it and that’s when we thought the only way we can really do this is through animation.”

"The whole world has become boring... it's all boring emails, bullet points and PowerPoint presentations and we’ve kind of lost the fun, so we’re challenging that”

The animation needed to align with Worldpay’s objective to avoid the complexities of B2B speech and analogies. By reinstalling fun from childhood learning back into boring business explanations, Worldpay aimed to not only achieve an understandable explanation but capture genuine interest via the imagination.

“We’re demonstrating the fact everything can be explained in a different way with a bit of imagination, appealing to senses and appealing to what we were like as children. The whole world has become boring, and when we were kids we were learning through avenues like film, cartoons and animation. Now, it's all boring emails, bullet points and PowerPoint presentations and we’ve kind of lost the fun, so we’re challenging that.” 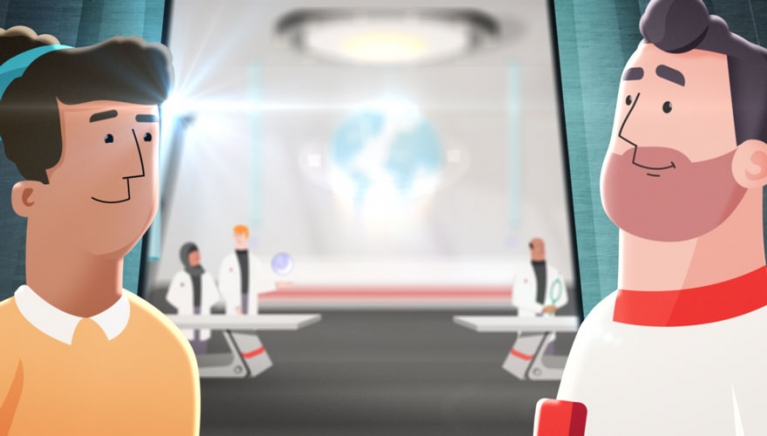 Film and animation company Gorilla Gorilla! worked in close collaboration with Javier and Worldpay brand manager Alex Smith to design a creative animation that was both fun but informative, with an emphasis on the range of solutions Worldpay offers for the payment journey.

Dean Beswick, creative partner at Gorilla Gorilla!, explains: “The brief was very clear – Worldpay wanted informative and entertaining. Using animation gave us the visual flexibility to bring to life the hidden elements of digital payments as well as allowing us to seamlessly jump from virtual place to place. In the right hands, animation can be a powerful and hugely effective marketing tool.”

The inspiration for a sci-fi space story came from wanting to emphasise the hidden journey of payments and maintaining an aspect of the high-tech world it exists in. To create a visual that would resonate with childhood memories the animation took on a retro aesthetic – in hopes the nostalgia would raise engagement and completion rates. To overcome potential language barriers – a problem that arises with global campaigns – the animation was created in multiple languages, including English, Mandarin, Spanish and Portuguese.

Javier admits animation isn’t a new marketing tool on the B2B scene, but states there's a fine line between normal animation and great animation. "There are lots of companies that have created software and come up with very cheap products where you can create an animation on anything," he says. "Animation used to be very expensive and it’s now really cheap. Everyone can do a bit of animation, but this has resulted in lots of companies producing lots of videos which are really sub-optimal. They haven’t got an image or a branding that people can relate to.

"What’s really hard is taking the time to come up with a good idea with imagery that has some culture behind it and has some soul.”

Three months on and the campaign is still generating traffic on both social media and the company website, highlighting the long-term benefits of the campaign's tools and tactics.

The campaign will run for up to six months, but Worldpay’s KPIs have so far seen impressive results:

Worldpay’s campaign highlights how the use of creativity and storytelling can aid any complicated topic matter, and successfully raise engagement stats in the process.