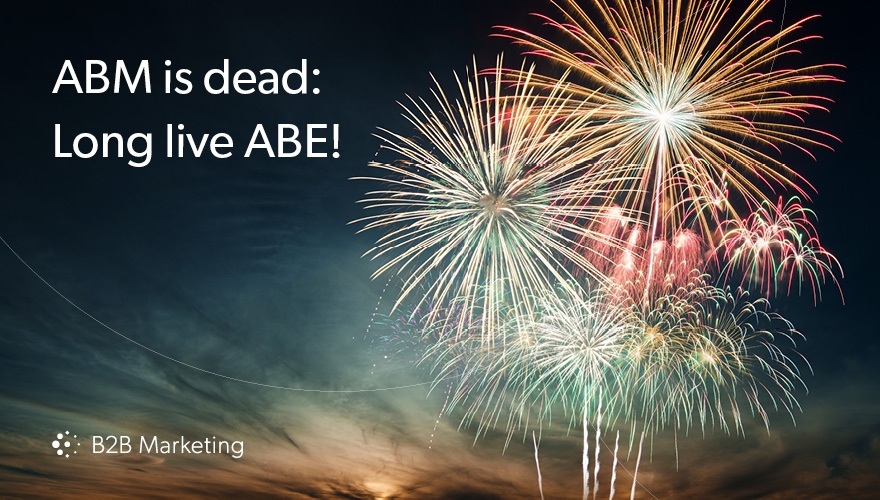 Now I know what you’re thinking: how can ABM be dead already if it’s only just arrived? And didn’t you write a blog a couple of weeks ago that said that ABM is no longer just a flash in the pan? (Thanks for noticing, by the way.)

Yes, yes – all very true. But increasingly it seems the word ‘marketing’ just isn’t enough to cover what’s going on in the emerging ‘Account Based’ world. This, at least, is the opinion of Jon Miller, founder of rapidly emerging martech vendor Engagio (and previously one of the founders of Marketo), who I had lunch with today in San Mateo California. And he’s not alone: his views are shared by others: including vendors like Terminus, agencies like Heinz Marketing and analysts like Topo.

The rationale behind this apparent rebranding of ABM is that the level of collaboration required between marketing and sales to do Account Based ‘stuff’ effectively is way beyond anything we’ve seen before. True, marketing automation brought sales and marketing together (sometimes kicking and screaming) and gave them a common dialogue and aligned set of objectives. But this was co-operation – they essentially remained in their silos, operating as separate teams, beyond the dialogue (and sometimes arguments) over SALs, MQLs, etc.

However, to operate on an account basis requires a far deeper level of integration and cohesion between the functions, with new ways of thinking, operating and behaving, which both parties have to adopt and embrace in order to succeed. And not only that, but a ‘customer success’ function is also required – a kind of customer service function on steroids. This, amongst other reasons, is why he’s striving to frame a bigger more inclusive and encompassing context for the notion of Account Based activities.

His preferred nomenclature is ‘Account Based Everything’ which emphasises the broader implications of the strategy… or possibly ‘Account Based Orchestration’ that refers to the role of the technology is co-ordinating and informing a complex programme of activities.

Given his clout in the Martech scene, and the philosophical alignment he has from the likes of Matt Heinz and Craig Rosenberg, this terminology looks set to catch on. But is this downplaying the pre-eminence of marketing within Account Based context necessarily bad for marketers? Does it represent a relative decline in its importance, or a new subservience to sales? Absolutely not, says Miller: marketing and marketers best understand how to deploy account based processes and technologies and will inevitably be in the driving seat to make a success of this model.

More cynically still, is ABE/ABO an attempt to create a new context for a technology which may have outlived the initial hype, and around which interest may be waning? Miller points to the tenfold increase in customers that Engagio has achieved over the last 12 months, to refute this. The company has also secured $22 million series B funding, and has expanded its San Mateo-based workforce to 40 staff.

Meanwhile, the fact that his former employer Marketo has unveiled ABM functionality in the completely re-architected version of its platform demonstrates more than anything else that this approach (and the associated technology) is becoming mainstream. Whether we ultimately call it ABM, ABE, ABO, or AB-something else entirely seems pretty incidental right now, and is certainly less important than understanding what it means to you and your business.