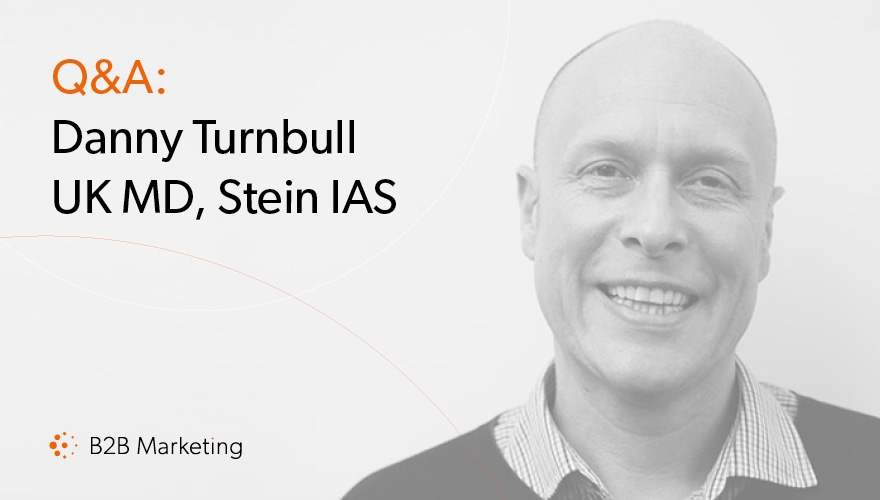 Joel: Not many agency MDs have run two offices at two different B2B agencies, let alone two in the same city! Is moving from gyro Manchester to Stein IAS anything like a footballer getting transferred from Manchester United to Manchester City?

Danny: That made me smile; I did wonder if Stein IAS would invest in a Carlos Tevez-style ‘Welcome to Manchester’ 48-sheet. As a football fanatic, it’s a tempting comparison to make, but as a United fan I’d rather not be cast in that role.

For many years, we were widely acknowledged as the bitterest of rivals, largely due to the perceived similarities between the businesses. However, having now been responsible for offices of both agencies, what I’ve quickly realised over the last three months or so is that the two businesses are poles apart in terms of their offering in the B2B space, which is really interesting.

Joel: What was it about Stein IAS that appealed to you? Besides not needing to move house.

Danny: Moving from one Northern powerhouse to another is definitely exciting, and something that up until I met the team last year, I’d never considered. Once I met Rob Morrice, I’ve not really looked back. After 16 years at gyro, I felt it was time for a change, and I couldn’t be happier with the decision.

People ask me why the move, and the temptation is to say a mid-life crisis but without the ponytail. The truth is that I was ready for a fresh challenge and this definitely represents it. To paraphrase Jay Z, there were 99 reasons for the move, but not moving house wasn’t one.

Joel: What’s your main objective now you’re onboard at Stein IAS? What is CEO Rob Morrice expecting from you?

Danny: My remit spans the UK and Paris – two huge markets for us, both creative hubs. We have a major presence in the UK, and in particular, the North of England, which I’ll be looking to expand further. The business has grown and continues to grow globally, and at significant speed. My appointment is to ensure that from an EMEA perspective, we continue to deliver on our hugely impressive 24% year-on-year increase in revenue (year ending February). Performance was driven by existing account growth, 15 account wins and a 107% increase in average revenue-per-client.

Stein IAS has a very strong culture of promoting from within, and so my appointment is somewhat of a deviation from that (and it may explain the 16 interviews). That’s a great privilege for me and gives the business some fresh new external perspectives.

Joel: Of all the B2B agencies out there, Stein IAS has one of the most illustrious histories – particularly given its inception as Industrial Advertising Services back in 1973, and the role of founder Tim Hazlehurst in establishing the Association of B2B Agencies, which then morphed into the BMC. Is that history something you're conscious of and does it weigh heavily on your shoulders?

Danny: Of course it’s something I considered (it’s reason 67), but it’s an honour, not a burden. As the proud son of a celebrated B2B academic, I have a great sense of destiny. I’m very proud of the fact that I took gyro in Manchester through its centenary year and feel privileged to be given the responsibility of maintaining the heritage of another B2B leviathan.

Joel: How much and to what extent has the B2B agency game changed since you first became an MD?

Danny: Clichés abound around the fact that everything changes but nothing. The rate of change in our sector has never been greater and is still accelerating. That said, it’s still fundamentally about two things: creativity that’s delivered by people for other people, and those are my passions.

The digital transformation in B2B has been incredible and Stein IAS has been at the forefront of that - in fact that’s one of the key reasons I joined. But that’s table stakes now. The post-modern marketing agency is one that embraces the tenets that characterise the ‘modern’ age of B2B (marketing automation, analytics, conversion, granular segmentation and targeting) and balances them with a renewed emphasis on the bold, intuitive creative experiences that re-assert our human nature. At Stein IAS, we aim to provide exactly that.

Joel: How have you evolved your own skillset as a consequence?

Danny: As the son of two academics, I’ve always been a great believer in personal development – a belief I share with my new employer (it’s reason 22). I’ve done an MBA and also a Certificate in Company Direction, and most recently completed the Google Squared digital leadership qualification. We’ve started the year embarking on a substantial training programme across all of our commercial staff, which I’m involved in delivering. That said, while it’s another cliché, you do learn best by doing and by working alongside other talented people.

Joel: Stein IAS chief creative and values officer Reuben Webb is quite a character – what’s the secret to a great relationship between the ‘suits’ and the creatives at an agency?

Danny: I met Reuben last year at one of my 16 interviews, and he certainly is a character (I’ll tell you off the record what his opening line was to me!). He and I established a very early connection born from a shared passion for creativity. His crusade to rid the B2B world of creative clichés is an endeavour I’ve long supported. We pitched together in my first week, which helped forge our friendship early on, and now we take great delight in kicking lumps out of each other every week in our agency five-a-side.

On a more serious note, the secret to a great relationship between the ‘suits’ and the creatives is a brilliant culture and great people. Reuben has actually greatly contributed to developing the cultural values that guide the agency and that sit at the heart of everything we do. It's these values that ensure everyone at the agency, no matter their role or location, is on the same page, making decisions that consistently reflect our core values and enable us to deliver more to our clients.

Joel: What do you think B2B marketers are looking for from an agency today?

Danny: It’s a bit like the famous Billy Connolly sketch – everything. Most people know the key drivers, as they're so well-researched and publicised. And, like the Billy Connolly sketch, the reality is that you can’t have it all, so for both clients and agencies it’s about choices. At the risk of gross oversimplification, during the last decade there has been something of a dichotomy emerging between the ‘new digital players’ and the more conventional ‘Mad Men’. We need to be alchemists and quants, daredevils and pragmatists, free-spirits and engineers. In the post-modern era, marketers must be both.

Danny: I don’t really have any huge challenges, just opportunities. Growing our Paris and London offices are certainly that.

Joel: What’s the biggest mistake you’ve made in your career? And the biggest lessons learned?

Danny: Many a year ago, I printed 20,000 ‘calenders’ instead of ‘calendars’ – a rather costly mistake. But, I learned from the experience. It’s important to have considered courage and accept that we all make mistakes. It’s about how you learn from them, having the determination and industriousness to jump back and being open to the fact there’s always more to learn. As an MD, it’s important that you put your trust in those around you to provide them with a platform to flourish and allow them the freedom to fail.

Joel: How much of your career trajectory was planned, and how much was due to serendipity?

Danny: Probably equal measures. I’ve always been ambitious, but if you have too rigid an idea of where you're going and how you'll get there, it can be very restrictive.

Speaking of serendipity, both times I’ve been offered an MD role I was seriously considering moving client-side. You could say my meeting with Rob was a chance encounter, so it definitely pays to remain open minded. My Dad told me to go to London, move from B2B to B2C and get out of agencies by the age of 30 – I didn’t do any of these things (sorry, Dad).

Joel: What advice would you offer to other aspiring agency MDs out there?

Danny: Work hard and be nice to people. Learn your trade and remember management is a profession that needs to be learned, not picked up on the job or rewarded as you happen to be good at another job.

Joel: What would be your dream B2B client to work on/with?

Danny: I’ve had the pleasure of working with many brilliant clients over the years, and it’s the people you work with that make them rather than the brand or the sector. That said, Manchester United…

Joel: What does the future of B2B marketing look like?

Danny: For the latest and greatest marketing technology - and, more to the point, still emerging machine-learning capabilities - to really create awesome value, marketers must connect it to brands' emotional roots. Only by combining technology with core insights about the emotions motivating human behaviour can we genuinely touch hearts and minds - and thereby influence behaviour in what we believe will be marketing’s post-modern era.