Herd mentality takes over at Nudgestock 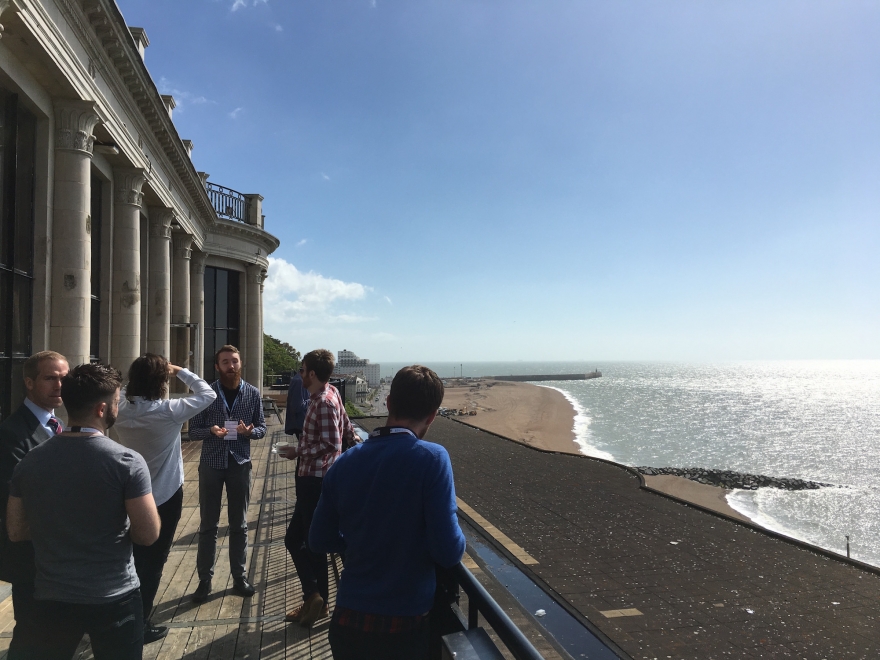 London's digerati take in the Folkestone sea air for Nudgestock 2017.

What’s the collective noun for a group of behavioural scientists and marketers? That’s the question I pondered as I strolled, in convoy with other prospective attendees, through the sun dappled streets of Folkestone in Kent, en route to the annual Nudgestock conference at the town’s scenic Leas Cliff Hall venue. Having just disembarked en masse from the London train, we instinctively (and somewhat appropriately) herded together at least a couple of hundred strong, to find the venue, making for what was probably quite an unlikely sight in a town for which the expression ‘faded seaside glamour’ was probably invented.

Those who made the trip down from ‘That London’ (as speaker Stevyn Colgan referred to it) or points further afield, were rewarded with fantastic views of the English Channel, and a day of fascinating and mind expanding insights from a wealth of excellent speakers, all delivered in TEDX-style punchy 15 minute slots. It made for an exhilarating and sometimes bewildering rollercoaster-style intellectual experience.

The event was introduced and co-hosted by the redoubtable Rory Sutherland, Spectator columnist and self-styled ‘worst dressed man in advertising’, and run by Ogilvy Change the behavioural science branch of the marketing empire. Sutherland was worth the admission price alone, effortlessly mixing inspired insights and observations with quick wit and his trademark shambolic bonhomie. He made us all feel like we’d entered his personal inner sanctum of humour and intelligence. For the record, it was precisely 23 minutes into the conference before he used the expression ‘cognitive dissonance’.

Sutherland began the day with the bold proclamation that increasingly psychology will become more important than technology in driving innovation and progress in business and marketing, simply because tech innovations have natural limitations, whilst human understanding and insight does not. It was a provocative statement, but one which set the tone for what followed. Some of my personal highlights from the day:

There were many other excellent points made by various other speakers, but the session that stole the limelight, at least in my opinion, was that by Dominic Cummings, the mastermind of the 2016 Vote Leave referendum campaign. It was inevitably a controversial session, particularly given that Nudgestock took place the day after the June snap election, which had been billed by Prime Minister May as the ‘Brexit Election’.

Cummings cut an unlikely figure for someone who has had such a profound impact on society – whilst the audience was hardly pristine in their dress sense, Cummings almost looked like he’d slept in his clothes. He presented a very matter-of-fact view of the campaign, much of which seemed inevitably post rationalised, but when asked if he had any regrets at the result, said ‘absolutely not’.

Personally, I found it a challenge to keep my personal feelings in check and listen objectively to what was a unique, highly informed and influential commentary. Amongst his many claims or revelations (depending on your point of view) was that Vote Leave had used machine learning and massive data samples to completely transform polling in the run-up to the referendum, which gave them a much better picture of public opinion.

With this note of controversy aside, Nudgestock was still an excellent event – it fully delivered on the significant hype on the topic of behavioural economics. If you’re looking for an event which will directly direct and determine your B2B marketing strategy for the immediate future, then Nudgestock is probably not it. But if you’re looking to be generally informed, educated and entertained, then it’s certainly worth the time and hassle to get to Folkestone.

So, what is the collective noun for a group of behaviour scientists, I hear you ask? Well, having thought about it long and hard, I’m plumbing for either an ‘influence’ or an ‘implication’. Further suggestions welcome.