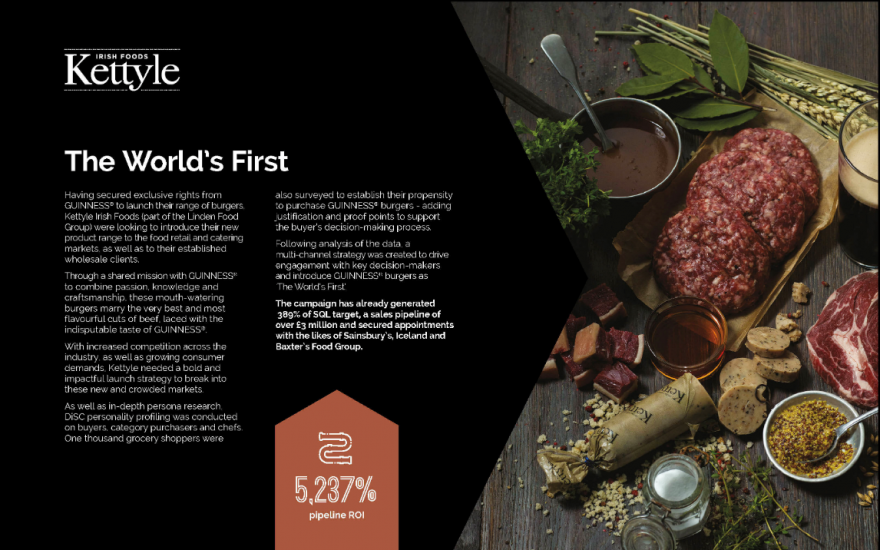 Having secured exclusive rights from GUINNESS® to launch their range of burgers, Kettyle Irish Foods (part of the Linden Food Group) were looking to introduce their new product range to the food retail and catering markets, as well as to their established wholesale clients.

Through a shared mission with GUINNESS® to combine passion, knowledge and craftsmanship, these mouth-watering burgers marry the very best and most flavourful cuts of beef, laced with the indisputable taste of GUINNESS®.

With increased competition across the industry, as well as growing consumer demands, Kettyle needed a bold and impactful launch strategy to break into these new and crowded markets.

Following analysis of the data, a multi-channel strategy was created to drive engagement with key decision-makers and introduce GUINNESS® burgers as ‘The World’s First’.

The campaign has already generated 389% of SQL target, a sales pipeline of over £3 million and secured appointments with the likes of Sainsbury’s, Iceland and Baxter’s Food Group.

Linden Food Group is a leading fresh meat processor in Northern Ireland. Founded in 1981 and with a £200 million turnover, it is a premium supplier of primals for the wholesale industry and parent company of several brands, including Slaney Foods and Kettyle Irish Foods.

As a leading artisan food company, Kettyle is a specialist in superior meats, from dry-aged beef to Lough-Erne lamb, and supplies a wide client base throughout Ireland, Europe and the UAE.

Linden Foods had secured a partnership with GUINNESS®, who wanted to enter the food market. Following this agreement in 2017, Linden continues to be the only licensee supplier of GUINNESS®-branded burgers. Linden previously tried to promote the product to existing customers, however with no launch strategy in place, customers were reluctant to steer away from their core products and Linden’s account managers were too time poor to give the promotion the full attention it needed.

To maximise the partnership, Linden chose to launch GUINNESS® burgers through gourmet brand, Kettyle Irish Foods. With this new route to market in place, Kettyle needed a launch strategy to drive engagement and brand awareness.

Driving demand all year round

As well as established relationships with wholesalers, Kettyle wanted to promote directly to selected retailers and hospitality outlets across the UK. However, the product was not seen as mainstream and with spikes expected in sales around events such as St Patrick’s Day, Kettyle wanted a more sustainable strategy to drive year-round sales.

With increased competition within the marketplace, the launch of the GUINNESS® burgers needed to be bold and impactful to achieve cut through.

Launch GUINNESS® burgers to the wholesale, retail and catering markets to drive an increase in new business pipeline opportunities.

To understand the audience’s pain points, barriers to purchase and typical personality types, in-depth persona research was conducted. The persona documents informed the strategy and messaging, whilst serving as a key resource for Kettyle’s sales team.

As this product was new to market, it wasn’t enough to just understand Kettyle’s target buyers. Really B2B wanted to create standout statistical evidence for the demand for GUINNESS® burgers to give buyers complete confidence and justication for stocking the product.

Research revealed that food retail and distributer buyers wanted a stand-out product they can offer customers. Following analysis of the insight, a multi-channel, integrated strategy was created to drive engagement with key decision-makers and introduce GUINNESS® burgers as ‘The World’s First’. A strong call-to-action was used throughout all communications, offering businesses a free tasting session (face-to-face meeting).

To launch the product with a bang, a compelling infographic was developed from consumer research, educating the audience on how hungry their customers were to try this product. It also showcased USPs, including farm-to-fork traceability, 100% British & Irish beef, and the authentic and unique GUINNESS® essence.

HTML emails were used to promote the infographic, teasing some key stats within the message and encouraging content downloads.

For an impactful product launch, the hero communication was a direct mail piece celebrating the GUINNESS® burger as The World’s First.

To create intrigue and increase authenticity, Really B2B sent a brown card envelope tied in butcher’s string. The condent tagline ‘Better than the butchers’ was stamped on the envelope to signify butcher-level quality. When opened, the prospect discovered a pull-and-reveal card.

The first visual displayed a stack of charred burgers shaped as a pint of GUINNESS® - a visual metaphor for the innovation of Kettyle’s partnership. When pulled, the tab at the top revealed a message which showcased the unique offering – The World’s First GUINNESS® Burger.

Inside, prospects could read about the product and discover Kettyle’s distinctive story. The call-to-action invited prospects to arrange a free taster session by calling or scanning a QR code, directing them to a landing page.

The campaign landing page provided more information on the range of GUINNESS® burgers and the key USPs. A strong call-to-action to book a free taster session was used to drive results.

To create a 1:1 conversation, highly-personalised emails were launched from a Kettyle email mask. Segmented by job function and industry, these communications focused on prospect pain points established in the research and reiterated the USPs of the new product.

One-to-one LinkedIn Inmails were sent ‘from’ the MD at Kettyle. Used in two ways - the Inmails first provided a tailored follow-up to direct mail recipients and also engaged prospects who were unresponsive via email. Using DiSC personality profiling, each message was hyper-tailored to the prospect’s unique personality style, creating additional cut-through and driving increased response. This channel drove a 14% response rate.

To add an extra layer of qualification and to close the sales loop, telemarketing was used to follow up inbound enquiries and to convert them to taster sessions and face-to-face meetings for the Kettyle sales team.

“This campaign has catapulted GUINNESS® burgers into the market. The analysis of our audience and their consumers allowed us to break into new markets with an intelligent strategy. The results speak for themselves and we’re excited for the next leg of the campaign with Really B2B."

This submission won the gold award for 'Best multichannel campaign', 'Best use of direct mail' and 'Best use of customer insight' at the B2B Marketing Awards this year.